Healthy Rice from the Border

"Far in the north of Indonesia, a dream for "A thousand organic villages" has begun to come true." 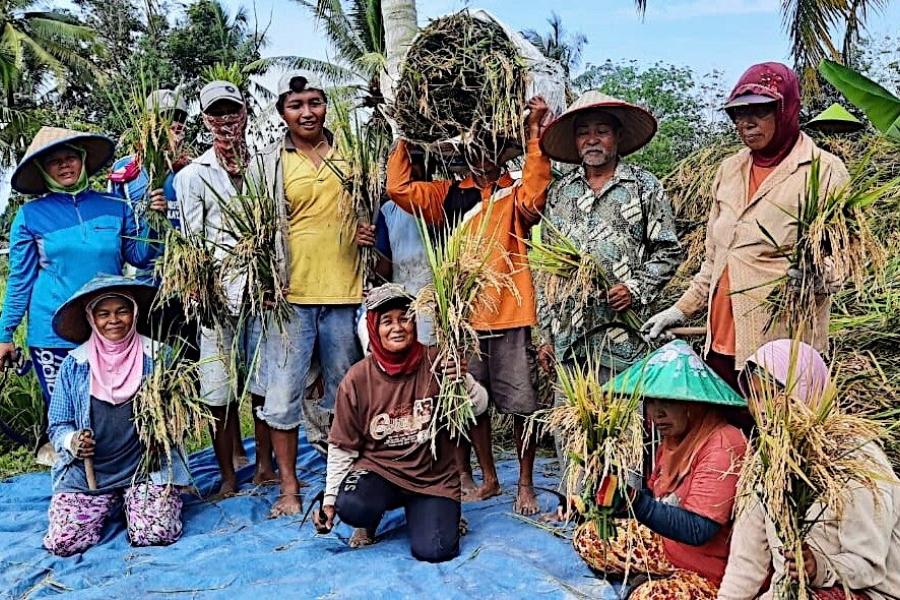 "Far in the north of Indonesia, a dream for "A thousand organic villages" has begun to come true." It was started with only 184 smallholders farmers in a border area,  Sanggau district, West Kalimantan.  With hard work, the farmers can now get an organic certificate for around 70 thousand hectares of rice field that they manage.

Iskandar ( 53) a farmer  who practices organic technique in Kembayan said that he never thought at first that he could manage an organic rice field. ”At first I thought the technique were very difficult, although I heard the price is good for organic rice“ said Iskandar.

Then with strong will together with his friends in the farmer group, Iskandar started to practice organic techniques these include the use of non-hybrid seed, modified irrigation system and natural, and safer fertilizer and pesticides.  At the last harvest he was able to get 1.8 tonnes of organic rice which sold at thirty five percent higher than the ordinary rice price. Most of the rice that he sold went to the neighbouring country, Malaysia.

Sanggau District is directly adjacent to the Malaysian state of Sarawak, with Entikong as the gate point for goods and people between Indonesia and Malaysia via official land routes. Sarawak is one of the places with the most potential as an export destination for agricultural products from Sanggau because of its geographical position.

Iskandars story is among hundreds of stories of farmers who feel their lives are changing because of the organic systems. Stories of their determination and bravery were revealed during the closing workshop of  the ”Support for Development of Organic Rice Farming Systems in West Kalimantan” programme today. The project was a collaboration between the Food and Agriculture Organization of the United Nations and Ministry of Agriculture , supported by the district government of Sanggau, West Kalimantan. The programme was piloted in three sub districts Entikong, Sekayam dan Kembayan.

Paolus Hadi, Bupati - the district chief of Sanggau said in his remarks in the rice grand harvesting season that he was really impressed with the results of the project. “This project will not stop here”. We will continue the work in extending the implementation of organic techniques to all villages in Sanggau“ he expressed his strong commitment.

His remarks were an affirmation of the Sanggau district government ownership of the project. Likewise, the FAOR programme assistant Ageng Herianto said, “This project belongs to the people of Sanggau. It’s not owned by us. We hope people of Sanggau will continue to apply organic systems to their land and become the pioneers of the one thousand organic villages that the Ministry of Agriculture have dreamt of“ he said.

Organic systems not only change the livelihoods of male farmers, but also revive women’s leadership in the community. At the end of the project, Yosefa Defi was elected as the head of the Subur Jaya Farmers group with her strong involvement in promoting the organic farming among the female farmers.  It was first ever event that her election ran against local community rules that only males should lead the organization. However, 2021 is a new era where female farmers can, after all, and with deliberation and agreement from all members as head the farmers group.

The Subur Jaya farmers group roles are filled mostly by men and regulations have been formulated mostly by male farmers. However, since 2020, when Yosefa Defi was appointed treasurer for the group, women’s voices have started to be position better in the group.

During the second planting season, the border areas experienced several disasters such as floods, forest fires, COVID 19.   Kenaman Village is an area frequently attacked by rats during planting season. Usually farmers do communal hunting, called “geropyokan”, which involving many people to gather in one place to reduce the rat population. However, in response to the pandemic, FAO introduced an innovative rat control called the “Trap Barrier System” which required only a few people to prepare the traps which were then also promoted by Mrs. Yosefa Defi and her group.

In addition, under Yosefa guidance, the group are very active in independently production of liquid organic fertilizer which consists of local ingredients such as; Noni Fruit, Maja Fruit, Papaya Leaves, pepper and Aloe Vera. “I would like to focus on applying organic farming so that we can prosper. I want to show that this farmer group a good model to others, so that they are interested to apply organic farming with green products", she said. 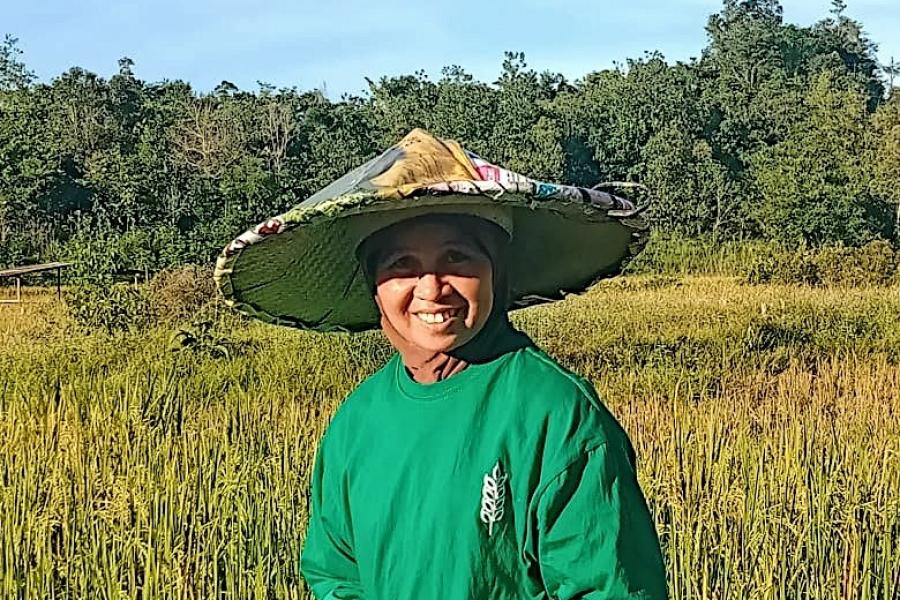 FAO supports the shift to organic agriculture because it emphasizes a healthy ecosystem approach rather than relying on chemical agricultural inputs. The organic system reduces potentially not only harmful environmental impacts by eliminating the use of less sustainable elements such as synthetic fertilizers and pesticides but also potentially more benefits to the farmers and rural people live. The ecosystem approach also has the advantage of producing safe and healthy food. 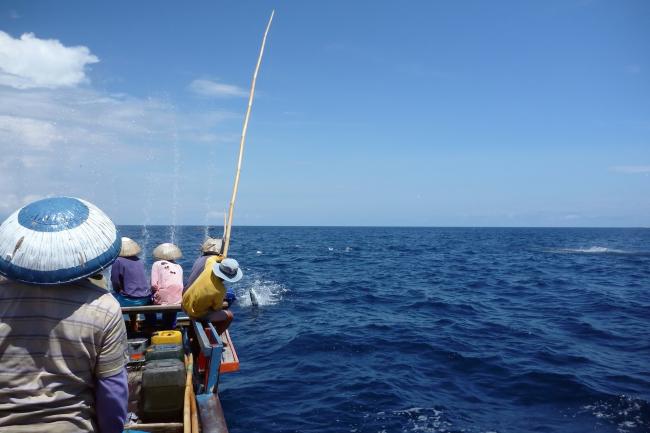 Following a competitive process involving 155 proposals from over 100 countries 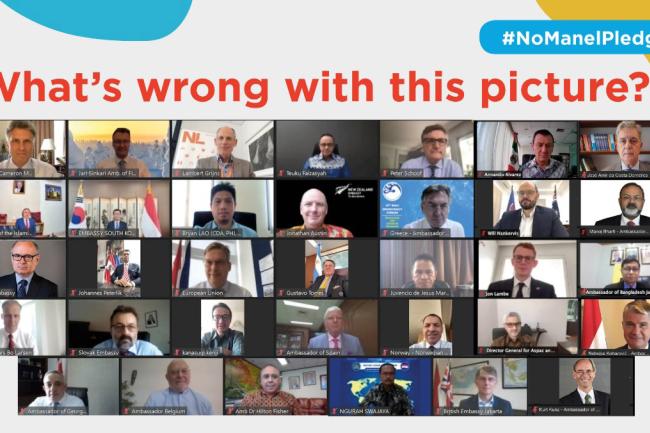 You’ve seen it before. Probably many times. Panel discussions featuring men only. 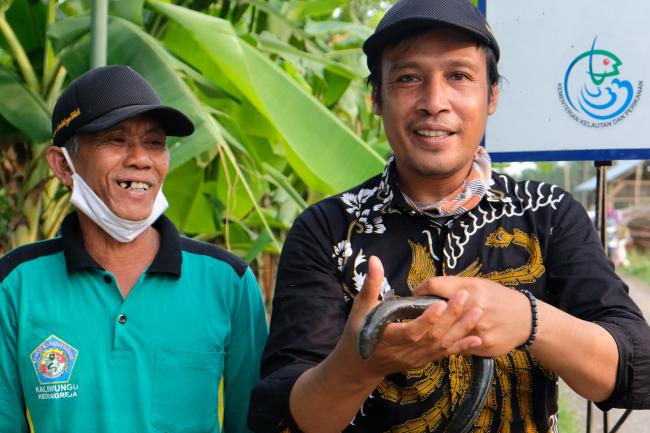